“And Now The Weather (Agus Anois An Aimsir)” 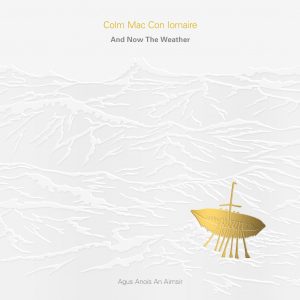 Update: You can now pre-order the CD here! As a thank you for ordering early, the first 200 CDs sold will come with a hand screen printed card signed by Colm. Orders will be shipped about 1 week before the official release date of April 17.
—–

We are excited to announce Colm’s new album And Now The Weather (Agus Anois An Aimsir) due out on 17 April. Colm will play a launch gig at Whelan’s that evening. Tickets are on sale now on the Whelan’s website or at the box office.

In the meantime, have a listen below to the new track “The Finnish Line”.

Colm Mac Con Iomaire returns with his second album And Now The Weather (Agus Anois An Aimsir) on 17th April. This is the follow-up to his debut solo album in 2008, The Hare’s Corner.

And Now The Weather marks a return to collaboration. From the impressive solo run that was The Hare’s Corner, the multi-tasking on stringed instruments, the immaculate production, this album features orchestral levels of players and instruments.

The album was recorded by Karl Odlum, Leon O’ Neill and Colin Elliot in studios and homes across Wexford, Wicklow, Sheffield, Dublin and San Francisco.

In a crowded field of outstanding Irish fiddle players and interpreters of traditional music, Colm Mac Con Iomaire is unique. After starting the band Kíla with school friends, Colm went on to found and play with The Frames, who celebrate 25 years together in 2015. Colm’s compositions have featured in both film and theatre.